The Jungfrau Railway was built at the turn of the 20th century. Since its inauguration on 1 August 1912, the highest railway station in Europe has been located on the Jungfraujoch, at 3,454 metres above sea level – Top of Europe. Due to the unique mountain scenery of the Eiger, Mönch and Jungfrau as well as the touching construction history involving railway pioneer Adolf Guyer-Zeller, the journey on the Jungfrau Railway is a unique attraction in the Alps with a worldwide appeal.

The consistently high demand for tourism forms the basis for the global positioning and marketing of the Jungfraujoch – Top of Europe. UNWTO, the tourism organisation of the United Nations, puts the worldwide growth in arrivals at a remarkable 7% in 2017. This was the highest increase in tourism demand in the last seven years. The UNWTO expects a continuation of this strong momentum in 2018 and a growth rate of 4 to 5 per cent. [11] 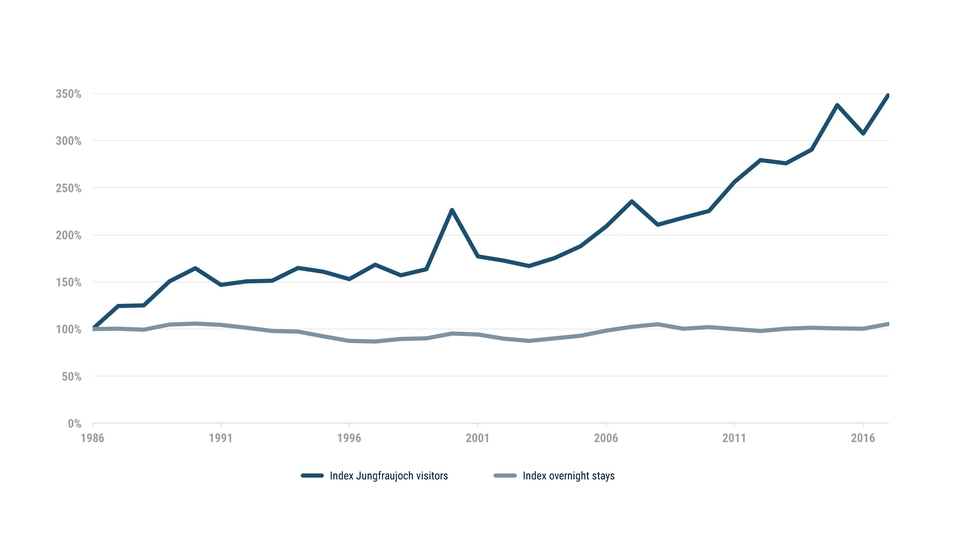 Benchmark for Jungfraujoch visitors and overnight stays for Switzerland indexed

As a pioneer on the Asian markets, the Jungfrau Railways Group already recognised the potential of Asia decades ago. The entire Jungfrau Region also benefited from this. Today, the broad anchorage in Germany, in Europe and in various countries and economic areas in Asia protects against excessive demand fluctuations (volatility of the tourism industry). In addition to the growth markets of China and India, other pillars are, for example, Japan and Korea as well as South East Asia in general. This market diversification has a stabilising effect. The variety of offers from the Jungfrau Railway Group increasingly plays a balancing role. With the Experience Mountainss, the complementary segment in the summer business, customers with a smaller travel budget can be targeted or the excursion to the Jungfraujoch can be meaningfully supplemented in the context of an extended stay (cross-marketing). The Experience Mountainss also achieved record results in 2017, although some of them are also attributable to particularly favourable weather conditions.

In the strategic risk analysis, the opportunities arising from the unique position of the Jungfraujoch and the particular reputation of Switzerland contrast with the risks of tourism demand. Behind these dangers are general factors such as currency fluctuations, the geopolitical security situation and the threat of terror. Due to the overcapacities in the Swiss mountain railways market, driven by a subsidy policy in all Alpine regions, as well as the price policy for public transport in Switzerland (mountain destinations being included in the Swiss Travel Pass) and the worldwide offer of alternative leisure activities, unprofitable offers from the mountain railway industry are coming under increasing price pressure.

The time required or time loss is an important quality factor in the modern tourism industry. Experienced travellers appreciate long transfers without any experience value as little as skiers appreciate long queues in front of the valley station where they will spend a valuable part of their skiing holiday. Speed, capacities and optimum utilisation are therefore among the quality factors that represent a weakness of the mountain railways from the pioneer days. The Jungfrau Railways
Group is paying particular attention to this area. Ongoing improvements could be achieved, for example, by more powerful and faster traction units, by track upgrades on the Wengernalp Railway or by a sophisticated reservation system on the Jungfrau Railway. Another advantage in terms of comfort is the realization of the V-Cableway. This major project will secure the medium and long term successful future of tourism throughout the entire Jungfrau Region as a vital year-round destination in Swiss tourism. This project is presented separately in detail in the management report.